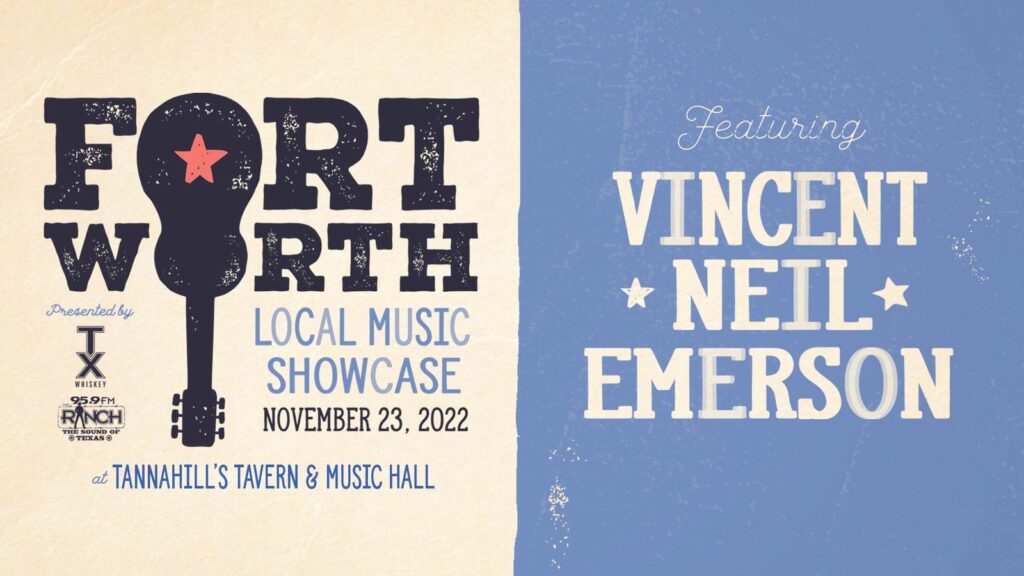 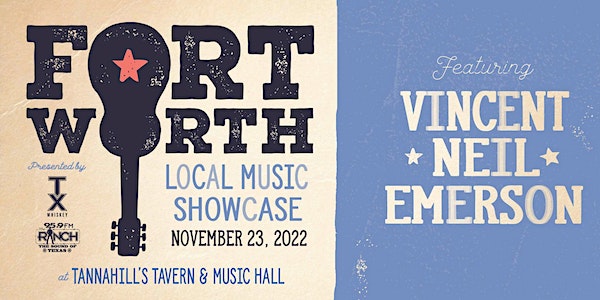 Come to Tannahill’s Tavern on Wednesday November 23rd starting at 1:00pm for the Fort Worth Music Showcase! 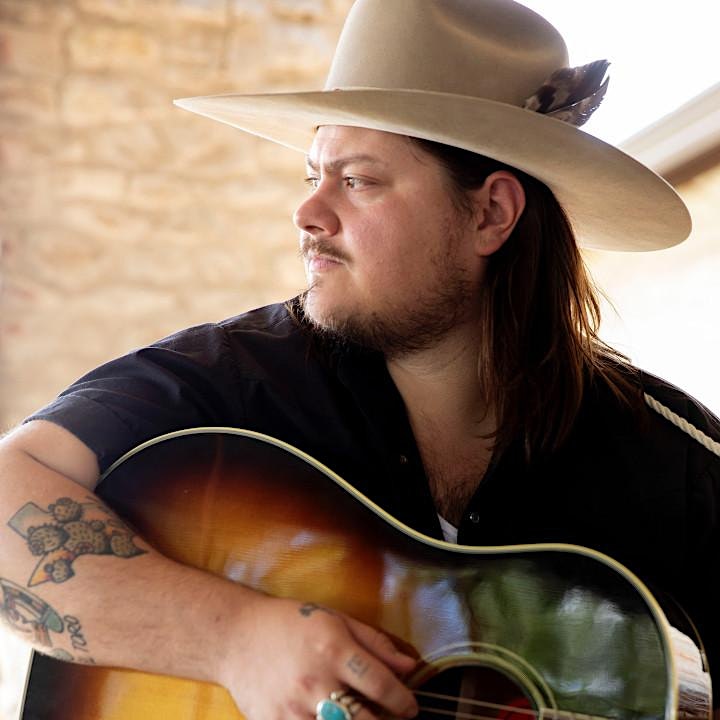 Vincent Neil Emerson is a torchbearer of the Texas songwriter tradition. He channels the straightforward truth-telling and resonance of his songwriting heroes in Townes Van Zandt, Guy Clark, and Steve Earle into something fresh and distinctly his own. Where his 2019 debut Fried Chicken and Evil Women proved himself as one of the most reverent students of country and western musical traditions, his follow-up LP, the masterful Rodney Crowell-produced Vincent Neil Emerson, which is out June 25 via La Honda Records/Thirty Tigers, is a brave step forward that solidifies his place as one of music’s most compelling and emotionally clarifying storytellers. His songs are cathartic and bluntly honest, never mincing words or dancing around uncomfortable truths.

Raised in Van Zandt County in East Texas by a single mother of Choctaw-Apache descent, Emerson’s world changed when he first heard Townes Van Zandt’s music. “To hear a guy from Fort Worth say those kinds of things and make those songs was pretty eye opening,” the now 29-year-old songwriter says. “I had never heard songwriting like that before.” He’s spent the better part of the past decade honing his songwriting and performance chops playing bars, honky-tonks, and BBQs joint across the Fort Worth area. His first album Fried Chicken and Evil Women, which he wrote in his mid-twenties and came out on La Honda Records, the label he cofounded that now includes a roster of Colter Wall, Local Honeys, and Riddy Arman, is a snapshot of his growth as a songwriter and stage-tested charm with songs like “Willie Nelson’s Wall” and “25 and Wastin’ Time” expertly combining humor and tragedy.

These marathon gigs and the undeniable songs on his debut introduced Emerson to Canadian songwriter Colter Wall, who quickly became a close friend and took him on tour. With Wall’s audience and sold-out theater shows on runs with Charley Crockett, Turnpike Troubadours, and many others, Emerson found his niche. “It took a guy from Canada bringing me on tour for people to actually start paying attention,” says Emerson. “Before that it was a grind like anything else just trying to make a living.” Crockett is another staunch early supporter of Emerson’s and covered Fried Chicken highlight “7 Come 11” on his 2019 LP The Valley.

Like every working musician, 2020 pulled the rug out from under Emerson. With the pandemic shuttering live music and cancelling promising tours, he processed the upheaval the only way he knew how: by writing his ass off. “At the beginning of quarantine, I was really frustrated with everything else going on,” says Emerson. “Everything was falling apart around me, and I didn’t know what to do.” He took to his writing shed and came up with the single “High On Getting By,” a gorgeous song full of self-reflection and resilience: the most autobiographical thing he’s ever written. He sings, “I got my first child on the way / And the bills are all unpaid / I should have finished high school / Got a job and learned to save / But the words keep on fallin’ / And the highway keeps on callin’ / To my pen.”

That song proved to be a turning point for Emerson. “After I wrote it, the floodgates opened up for me in my songwriting and emotionally,” he says. “Songwriting has always been a therapeutic thing for me. So, I just started writing more from the heart.” Allowing himself to be open and reveal some of the most intimate details of his life was a scary yet freeing prospect for Emerson, especially on the raw and devastating “Learnin’ To Drown,” which addresses his father’s suicide. “I’ve been trying to write a song about my father’s passing for a while,” he says. “I was just having a hard time processing that emotionally. Before I was always trying to find a way to kind of dance around it and not really give too much away. But there’s no beating around the bush here.” He sings, “Well there ain’t much that lasts too long / All the rights that I took wrong / All the lefts that still ain’t gone / They will be here / Here in my sad bastard song.”

Elsewhere, on “The Ballad of the Choctaw-Apache,” he sings of how in the 1960s the Choctaw-Apache tribe of Sabine Parish was forced to sell “180,000 acres of ancestral land” to the government, uprooting them from their home. Emerson pulls no punches in his narration of the historic injustice, channeling the essence of traditional folk songs. He sings, “Well you take away their home / And you claim what you don’t own/ Well I guess it’s just the American way.” Emerson explains the track: “This happened not too long ago and it affected my grandparents and my family directly. I’ve always strayed away from trying to write political songs, but this is more about human rights. For those people who were stripped of their land like that, it’s still tough.”

His intense and productive writing sessions produced 10 finished songs over the course of just a couple of months, a body of work so personal that he knew he would have to name the final product Vincent Neil Emerson. These demos caught the attention of Texas country icon Rodney Crowell, who signed on to produce and record the LP. “Rodney is a hero of mine,” says Emerson. “He wanted to make something that serves the songs, as opposed to making a record trying to put focus on production or the playing. It was an honor to work with him.” Crowell had similar high praise for Emerson: “If he grows on the public the way he’s grown on me, it’s possible young Vincent will plant the flag of his [songwriting] forebears firmly in the consciousness of a whole new generation.” At the studio, Emerson tracked the songs with a crack team of session players. “Because of them, we were able to get those songs in one take,” he says.

You can hear that no-frills approach on the barnstorming “High on the Mountain,” a bluegrass tune that highlights Emerson’s versatility as a performer and depth as a lyricist. On first listen, the track opens with upbeat fiddles and blistering guitar feels, but Emerson’s voice achingly sings of heartbreak, loss, and irrevocable change: “I pulled into Austin / ‘Cause Fort Worth ain’t the same.” Opener “Texas Moon” grapples with home after so many days away on tour: “I been missin’ home / But I just can’t ever stay / Well it don’t feel like ramblin’ / ‘Til ya take it day by day.” Emerson is never overly sentimental and across this album, he makes a point to just say how he feels in the most straightforward and real way he can.

“I think I’ve always gravitated towards artists that are honest about what they’re doing.” says Emerson. “It’s the most important thing because people have a chance to connect to a little more if you’re telling the truth.”

In this article:
Up Next: