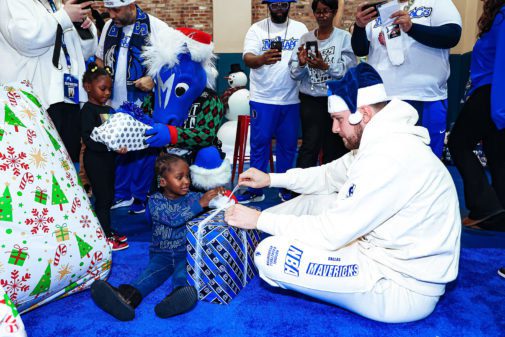 DALLAS — As the Official Dentist of the Dallas Mavericks, Jefferson Dental & Orthodontics was honored to sponsor the experience of a lifetime for a group of homeless children in Dallas-Ft. Worth at the annual Cookies with Santa event on December 13, 2022.

The entire 2022-23 Dallas Mavericks team and Mavs entertainers spent the afternoon hosting children from Vogel Alcove, a nonprofit which provides support services for homeless children and their families.

The kids enjoyed classic holiday festivities, including a special reading of “‘Twas the Night Before Christmas” from Santa himself.

Each child received a gift bag full of presents and necessities, including items from their Christmas list, clothing and dental kits provided by Jefferson, to enjoy during the holiday season.

To celebrate the season, the kids enjoyed holiday-themed crafts, decorated cookies, and wrote letters to Santa. Little did they know that later in the evening, Santa and the Mavs would be giving them exactly what they asked for.

After Santa made his grand entrance, he sat down and read “‘Twas the Night Before Christmas” to the kids with his special helper elf, Dallas Mavericks player Josh Green. They were hanging on to his every word and were so excited to meet the REAL Santa Claus!

When story time came to an end, the Mavs acted as Santa’s elves, handing out gifts to each kid. They also received dental kits, clothing, and other necessities. The Mavs even helped unwrap and assemble their toys so they could play and enjoy them right away.

One of the sweetest moments of the event was towards the end, when the kids got to shoot hoops assisted by their much taller friends, the Dallas Mavericks.

The players lifted them up to the basket so they too could feel the joy of scoring points for the Dallas Mavericks. Even Santa sunk a few shots! 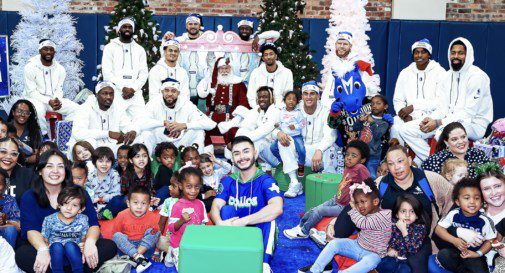 In this article:Dallas Mavericks, featured
Up Next:

“An Evening with The Great Nowitzki” Set for Feb. 21 in Dallas