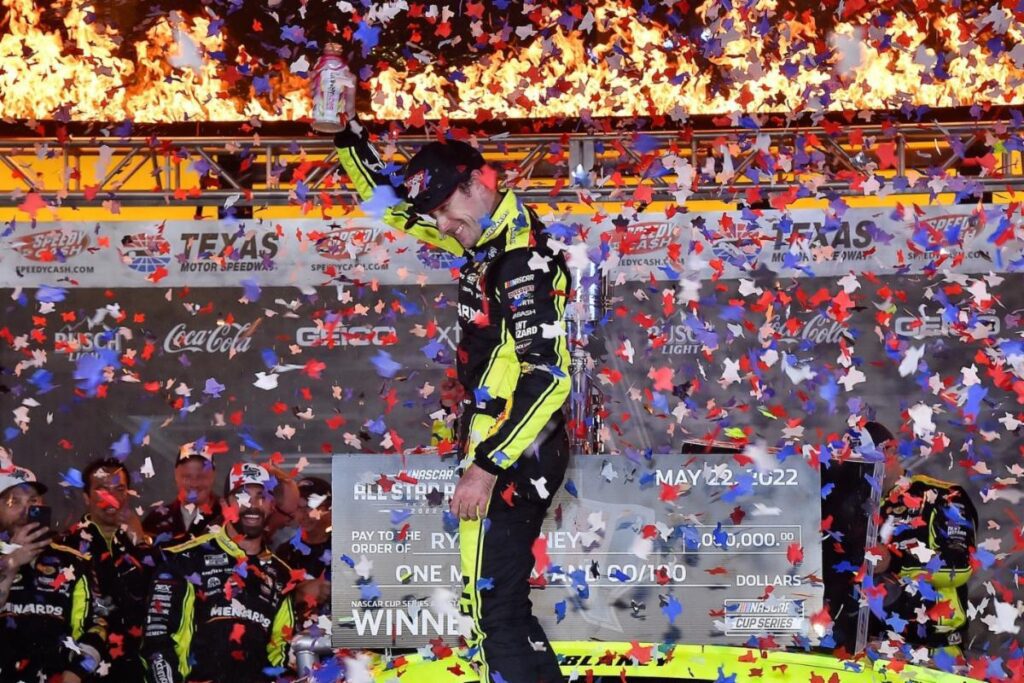 Blaney was yards away from winning his first NASCAR All-Star Race when the caution came out just prior to him crossing the finish line, but the Team Penske driver thought he had won the race and unlatched his driver window net in celebratory anticipation.

He struggled initially to get the safety feature back in place while driving under caution in preparation for the two-lap overtime before handily holding off a charging Denny Hamlin by .266 of a second for the $1 million winner-take-all payday. Blaney, who had never finished higher than fifth in four previous All-Star appearances, gave Team Penske its first All-Star win since 2016 and fourth overall.

Had Blaney been unable to relatch the window net before the green flag for the overtime period, there was a possibility that NASCAR could require him to pit for his crew to handle it and relinquish the lead. It would have been a crushing blow since he led every lap of the scheduled 50-lap final stage and ensuing overtime.

“It was about to be real bad for us if — I thought the race was over,” said Blaney, who said it usually takes two crew members outside the car to latch the safety net. “Everyone thought the race was over. I already had my window net down. I do want to thank NASCAR for letting me kind of fix it and not make us come down pit road. But yeah, that was really tough. Then having to do it all over again after trying to get that window net back up there.”

The chaotic scene was set when Blaney was approaching the finish line for the apparent win when Ricky Stenhouse Jr. tapped the wall in Turn 2. Television replays showed the yellow caution lights coming on before Blaney’s Ford crossed the line. He had a more difficult time getting the window net finally in place than dispatching Hamlin in the two-lap shootout for the $1 million prize.

On the restart, he got a huge push from Team Penske teammate Austin Cindric, who restarted third, that launched Blaney into the lead. Hamlin then had his hands full trying to clear Cindric and that allowed Blaney a cushion on Hamlin, who earlier gambled on a late pit stop for two fresh tires while the top four – Blaney, Cindric, Joey Logano and Daniel Suarez – stayed out to maintain their positions.

Hamlin was closing during the overtime but couldn’t overtake Blaney as they came out of Turn 4 and through the dogleg toward the finish line.

“I just needed to stay beside the 12 (Ryan Blaney),” Hamlin said. “You know, it’s tough because he deserved to win the race, but if you mess up and you break a rule – not intentionally, but there’s rules and we have rules in place for safety. My crew chief is taking four weeks off because of safety. I nearly crashed him off of Turn 2 when I got squeezed there. If I send him into traffic and he’s got no window net, then what, right? Luckily, that didn’t happen, and NASCAR avoids another controversy because there wasn’t a wreck in a car with no window net.”

It appeared it could be the Kyle Busch show after being dominant from the outset before trouble struck. The Joe Gibbs Racing driver, who started on the pole, went wire to wire as he led all 25 laps to win Stage 1. Busch picked up where he left off in Stage 2, leading the first 18 laps of the 25-lap segment before calamity struck and knocked out three primary contenders.

Busch slowed on the frontstretch due to a tire going down and Trackhouse Racing’s Ross Chastain ran up on and over the car of the 2017 All-Star winner at approximately 185 miles per hour. Chastain then careened across the track, where he collected 2020 All-Star winner Chase Elliott near Turn 1 and all three drivers were knocked out of the race.

“I saw Kyle have an issue with a tire down,” Chastain said. “I guessed left, and I should have guessed right. It was a big hit into Kyle. It was a tough break, but we had a fast car.”

Added Elliott: “I saw the No. 18 (Kyle Busch) had a problem; and then I saw the No. 1 (Ross Chastain) hit him really hard. I just didn’t give him enough room. I knew he was going to go straight; I just didn’t realize he was going to go that far right that quick. I just kind of misjudged it. It was really avoidable on my end. I just kind of messed up and didn’t get the gap shot quick enough.”

Just prior to the multi-car incident, yet another former All-Star winner from Hendrick Motorsports was knocked out of the race. Kyle Larson, a two-time winner and looking to become the third driver in All-Star history to win back-to-back events, had his race come to an abrupt end 13 laps into the stage when a tire issue led to heavy contact with the Turn 4 wall. Cindric, the Cup rookie who earned an All-Star berth by winning the Daytona 500 in February, took advantage and claimed the stage win over Blaney.

Team Penske also showed speed in the Pit Stop Challenge, which was held between the second and third stages. The pit crew of Joey Logano paced the field in the mandatory four-tire stop with an overall time of 36.353 seconds that include driving in and out of pit lane.

The team showed even more muscle with Blaney winning Stage 3 in overtime over Cindric and Logano. The success positioned all three Team Penske drivers to start the final stage among the top five and set the stage for the dramatic finish. Blaney would go on to lead the final 84 laps of the event.

In this article:featured, Texas Motor Speedway
Up Next: