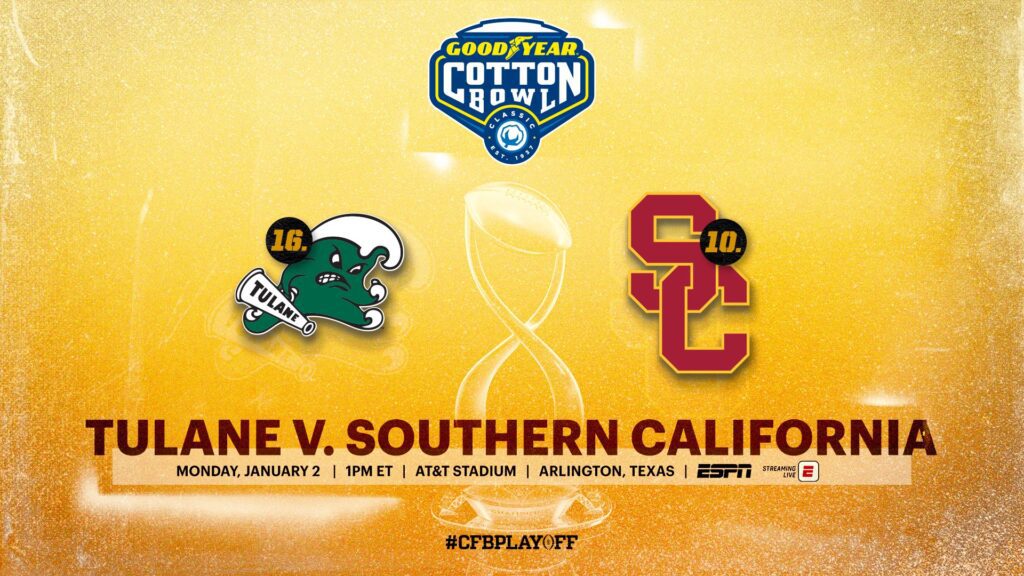 ARLINGTON, Texas – No. 16 Tulane and No. 10 Southern California are set to meet in the 87th Goodyear Cotton Bowl Classic on Monday, Jan. 2 at Noon CT on ESPN and ESPN Radio.

Tulane (11-2, 7-1 American Athletic Conference) is making its first Cotton Bowl Classic appearance as well as its first New Year’s Six appearance since that designation was created in 2014. The Green Wave’s bowl history includes two Sugar Bowl appearances (a 20-14 win over Temple on Jan. 1, 1935, and a 14-13 loss to Texas A&M on Jan. 1, 1940) to go along with its Rose Bowl Game appearance against USC.

“We cannot be more excited to have Tulane and USC coming to North Texas for the 87th Goodyear Cotton Bowl Classic,” said Dave Brown, Chairman, Cotton Bowl Athletic Association. “We are ready to give their student-athletes, coaches, administrators, fans and alumni an experience of a lifetime with our Classic flavor and our famous hospitality.”

Southern California enters the Classic coming off a Pac-12 Football Championship Game appearance. The Trojans had won five in a row before falling to Utah in the title game. USC is led by Heisman Trophy hopeful Caleb Williams. The sophomore quarterback threw for 363 yards and three touchdowns in the title-game loss to Utah. USC head coach Lincoln Riley is no stranger to the Cotton Bowl Classic, having led Oklahoma to a 55-20 win over Florida in the 85th Classic on Dec. 30, 2020.

Tulane is making its 16th bowl appearance and first since a 38-27 setback to Nevada in the Famous Idaho Potato Bowl on Dec. 22, 2020. This year’s Green Wave has engineered one of the biggest turnarounds in recent years, going from 2-10 a year ago to an 11-2 mark this season. Head coach Willie Fritz has now led Tulane to four bowl appearances, with trips to the AutoNation Cure Bowl (Dec. 15, 2018), the Lockheed Martin Armed Forces Bowl (Jan. 4, 2020) and Famous Idaho Potato Bowl (Dec. 22, 2020). Fritz is 2-1 in bowl appearances at Tulane.

Tulane hosted and won its first AAC title with a 45-28 triumph over UCF. Leading the way for Tulane is junior quarterback Michael Pratt. The second-team All-AAC signal caller threw for a career-high 394 yards four touchdowns and added 48 yards and a score on the ground to earn Most Outstanding Player honors in the title game on his home field.

“Tulane and USC deserve to be honored for an incredible season and we will certainly put on a great show,” said Rick Baker, President/Chief Executive Officer, Cotton Bowl Athletic Association. “We want all of New Orleans and southern California to come to North Texas to support these remarkable teams.”

The 87th Goodyear Cotton Bowl Classic is the 14th to be played at AT&T Stadium. This year’s Classic marks the 15th time the game will be played on January 2 and the first since the 81st edition (Wisconsin 24, Western Michigan 16) on Jan. 2, 2017.

This year’s Classic matchup features a team from the American Athletic Conference for the third time and a Group of Five conference for the fourth time – 81st (Western Michigan [Mid-American Conference]), 84th (Memphis [AAC] vs. Penn State) and 86th (Cincinnati [AAC] vs. Alabama).

Tickets for the 87th Goodyear Cotton Bowl Classic are sold out via the Classic’s ticket office. Tickets are available via the participating institutions’ athletics ticket offices and may be available on the secondary market via SeatGeek, the official ticket provider of the Goodyear Cotton Bowl Classic. CLICK HERE to view available 87th Classic tickets on sale via SeatGeek. Suites are available for purchase by calling 817-892-4470 or sending an e-mail to suites@dallascowboys.net.

Ticket holders for this year’s game must use the Goodyear Cotton Bowl Classic app, available for download on iOS and Android devices, to manage tickets and parking to enter AT&T Stadium on game day. Fans and followers can keep up with the latest information on bowl week and game day activities and events at GameDay.GoodyearCottonBowl.com.

In this article:AT&T Stadium, Cotton Bowl, featured, Tulane, USC
Up Next: