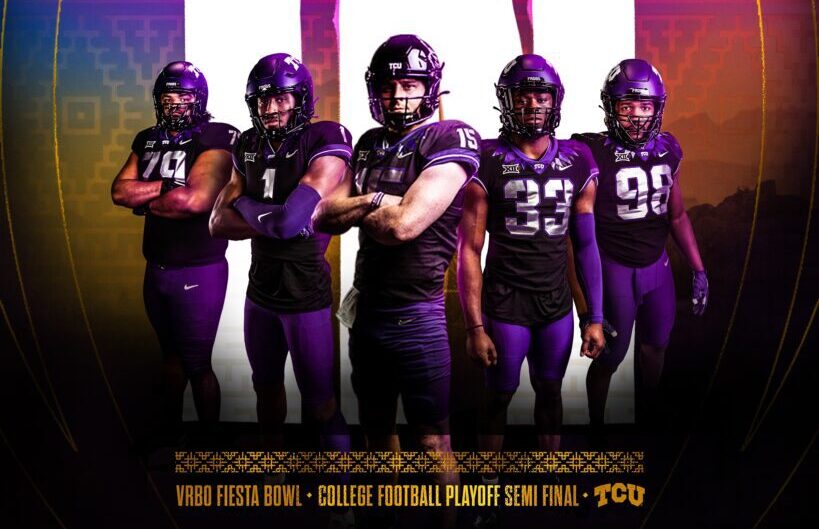 TCU will make its first College Football Playoff appearance when it faces Michigan in the Vrbo Fiesta Bowl on Dec. 31 at State Farm Stadium in Glendale, Ariz.

THE HORNED FROGS ARE IN❗️@tcufootball is hyped for the #CFBPlayoff 👏 pic.twitter.com/qunmNeFpnu

Under Big 12 Coach of the Year Sonny Dykes, TCU (12-1) was ranked third by the CFP committee.

The Horned Frogs will play in their first bowl game since the 2018 Cheez-It Bowl, a 10-7 overtime win against Cal. TCU was selected to the 2020 Texas Bowl versus Arkansas, but the game was canceled.

The Horned Frogs and Wolverines will meet for the first time in their history. TCU’s last game against a Big Ten opponent was a 34-13 win at Purdue in 2019.

TCU will play in its second Fiesta Bowl.

The Vrbo Fiesta Bowl will mark the 35th bowl appearance in TCU’s history.

Ten of TCU’s last 11 bowl games and 12 of the past 14 have been decided by eight points or less.

Ticket requests through TCU for the Vrbo Fiesta Bowl and a potential appearance in the CFP National Championship can be made HERE with a Monday deadline of 5 p.m.

Tickets will be allocated through TCU’s Priority Points System.

In this article:college football, featured, tcu
Up Next: