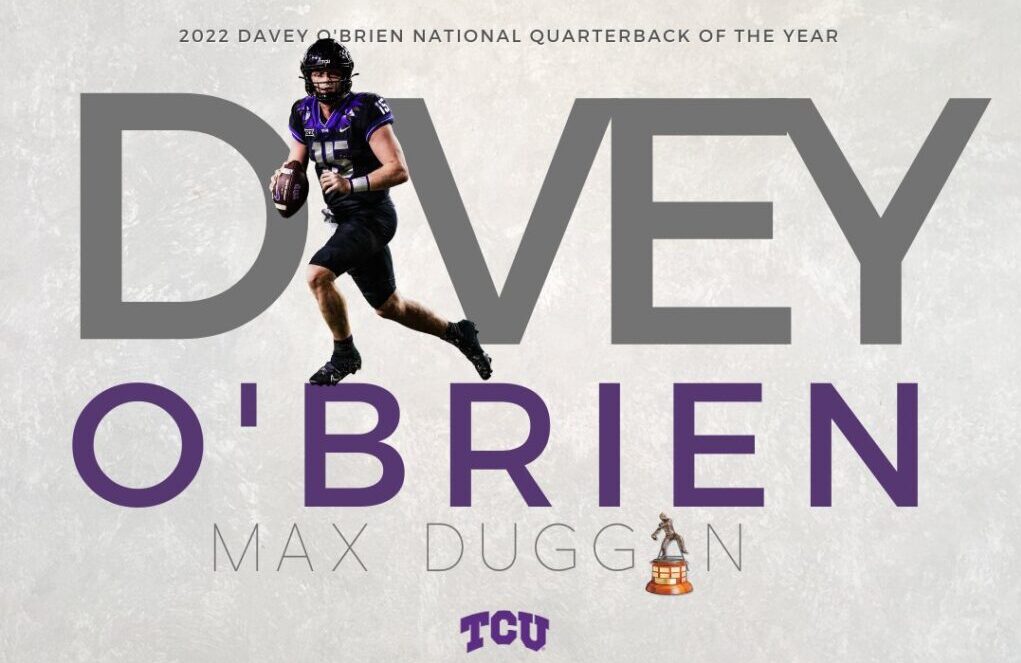 TCU’s Max Duggan has been named the winner of the 2022 Davey O’Brien National Quarterback Award.

The best passer in all of college football! 🎯

The announcement was made during Thursday’s ESPN College Football Awards Show. Duggan, who received the Johnny Unitas Golden Arm Award on Wednesday night in Baltimore, is in New York City as a Heisman Trophy Finalist.

He is the first Horned Frog to win the Davey O’Brien Award, named after TCU’s 1938 Heisman winner who led the Horned Frogs to the national championship that season.

Duggan will be recognized at the Davey O’Brien Award banquet on Feb. 20 in Fort Worth.

Duggan has led the Horned Frogs to their first College Football Playoff Appearance. TCU is 12-1, including the Big 12’s first 9-0 conference season since 2016. The Horned Frogs will face No. 2 Michigan in the CFP Semifinal Vrbo Fiesta Bowl on Dec. 31.

The Big 12 Offensive Player of the Year and unanimous First-Team All-Big 12 selection, Duggan is ninth in the nation in passing efficiency with a 165.5 rating. He is tied for second among Power 5 quarterbacks, one off the lead, with 16 touchdown passes of at least 20 yards and has accounted for three or more touchdowns in eight of his 12 starts this season.

A Council Bluffs, Iowa, native, Duggan leads the Big 12 in passing efficiency, touchdown passes (30), passing yards (3,321), yards per attempt (9.0) and yards per completion (13.9). He has thrown just four interceptions. His touchdown passes and 36 touchdowns responsible for (30 passing, 6 rushing) rank third for a season in TCU history, while his 64.9 completion percentage is fourth.

Duggan keyed TCU’s furious fourth-quarter comeback against Kansas State in the Big 12 Championship Game, leading a pair of scoring drives to force overtime after an 11-point deficit in the final 7:34. He became the first player with 250 yards passing and 100 rushing in a conference championship game since 2015. Made possible because of a TCU penalty, he rushed for 95 yards on the game-tying 80-yard drive. He had a 19-yard run on a 4th-and-2 and then a 40-yard gain to set up his 8-yard scoring run on the next snap. He then completed a pass to Jared Wiley for the 2-point conversion.

In a 29-28 win at Baylor, Duggan led fourth-quarter scoring drives on TCU’s final two possessions without its leading rusher (Kendre Miller) and top-two receivers (Quentin Johnston, Derius Davis). The game-winning drive also came with TCU not having any timeouts available. He completed 7-of-9 passes for 83 yards while rushing four times for 33 yards on the two drives.

With a 73-yard touchdown pass to Taye Barber and a 67-yard scoring run just 1:18 apart against Oklahoma, Duggan became just the second player nationally in the last 15 years and first since Lamar Jackson in 2016 with a touchdown pass and touchdown run of at least 60 yards in the first quarter of a game.

In this article:featured, Max Duggan, TCU Football
Up Next: